This week Belgian media announced they are going to implement a joined initiative for a payment solution to restore a lot of their content behind a new version of the Berlin Wall. They thought it to be necessary to ensure their future. A couple of months earlier our very own Belgian (or should I say Flemish) media tycoon Christian Van Thillo, one of the men behind this fight against free content on the internet, also picked a battle with the Telenet people (providers of internet, TV and telephone solutions in Flanders) because of the (mis)use of their TV-digicorder allowing us, the viewers, the public, to fast-forward through his commercials… It shows the lack of comfort the old media still exhibit versus new technologies and a changing world.
However I think they’re making some huge mistakes going into the defensive mode, looking at ways to shield of their content and to force their public to look at their content “their way”  – so including the ads for example, too many ads and way too many teasers for their own programs in between the content we wanted to see. They might be, to put it rather bluntly, the first among those criticizing the old dictator regimes far away in their struggle against the revolution towards freedom, according to me they have more or less the same reflexes when it comes somewhat closer to home… ;) 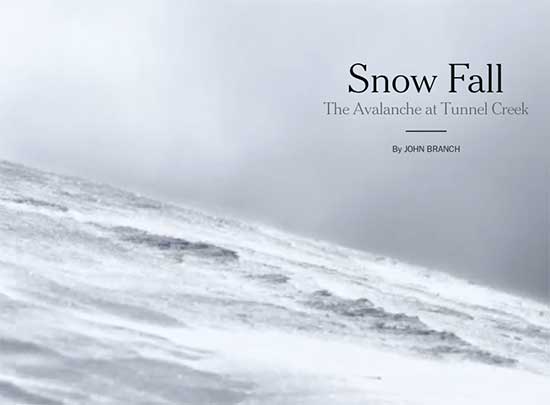 However sometimes some of these guys/girls do get it and bring us something the way we, the public, like it… Rediscovering the interesting blog Belgiancowboys.be I stumbled upon their item about Snow Fall. A great example of online storytelling was published earlier this week by the renowned NY Times. Their attempt of bringing together media, the way they exist today, in the story “Snow Fall” may not be that spectacular, for the most of the public, but that is just one of their greatest achievements. It comes so naturally to us readers we immediately forget the way they tell this story has not been that common until now.

So, when you have some time,  get out your laptop or even better your iPad and start reading, viewing, listening… enjoying a story well told on these so-called new media… Click here!